Isaac Briggs died in 1852, a sad and lonely alcoholic living in an isolated hut at Black Brush, Brighton. His life started with promise in 1789 [i] in Elland, Yorkshire where he became a successful weaver, able to both read and write. In 1821 he married [ii] Alice Dean, who was the youngest of six children born to Moses and Mary Dean. It was decisions by Isaac's father-in-law, Moses, that ultimately lead to his downfall.

The Dean family built Old Farm House in Barkisland in 1620. Still standing, it incorporated part of an even older building. Dating back to settlement by the Danish Vikings from 650, Barkisland is a village in West Yorkshire. In 1811 nine cotton mills were in operation in the greater area deriving power from the river Ryburn making it a thriving commercial centre.

Old Farm House (and the associated farm) passed through several generations to Moses and Mary Dean who decided that the farm was no longer viable and converted Old Farm House to a pub they named Sign of the Cross after a nearby stone Celtic Cross. In 1798 Moses died [iii] , aged 49 years. He left his property to be divided among his six children, once they were 21 years old. This decision by Moses, to share his estate equally was the start of a series of disasters.

Moses' widowed wife Mary re-married, to a local stonemason, John Ainley who tried to comply with the terms of the will and some of the children were paid their share. The eldest son, Joseph, received his and became a school teacher in Liverpool but there was not enough money to pay everyone. When the young­est daughter Alice, who was born in 1797, came of age there was nothing left and the pub had been mortgaged three times over, which eventually led to a fraud trial and, in 1825, bankruptcy.

In 1827 Isaac Briggs, who had married Alice six years earlier, was also declared bankrupt. The pub, Sign of the Cross, was sold along with the other land and assets by public auction on 29 June 1827. The pub still trades today as one of the only two in Barkisland, and is now known as the 'Fleece Inn'. 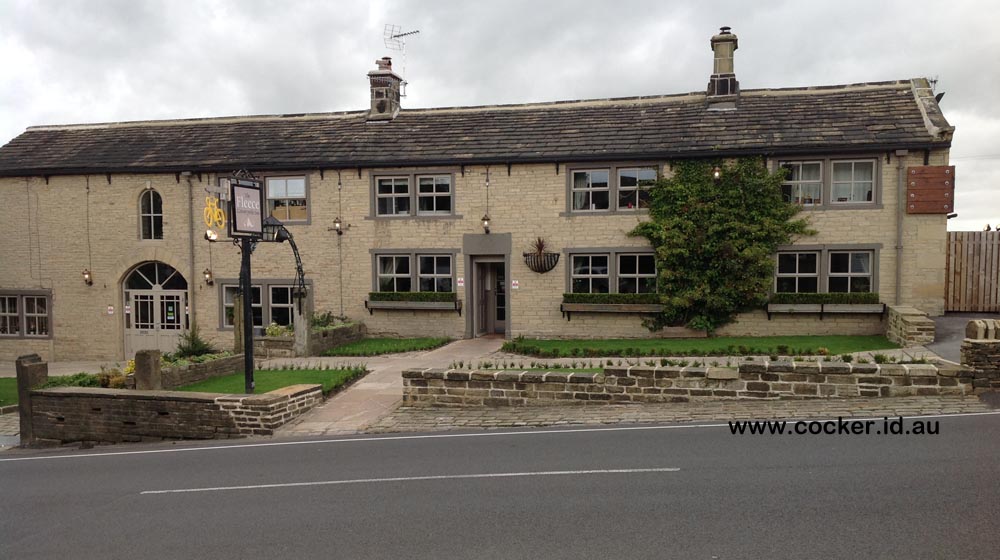 Isaac Briggs and Alice Dean's marriage was on 27 October 1821 in St John the Baptist Church, Halifax. They had three children: Mary, Alice and Sarah Elizabeth. Isaac was able to read and write and was a weaver, like his father. Isaac must have been desperate to provide for his wife who was pregnant with Sarah Elizabeth because he resorted to crime and became a member of an infamous local gang of forgers.

Just days before Sarah Elizabeth was born, Isaac entered a guilty plea to two charges and on 19 July 1828 he was sentenced to death at the City of York Summer Assizes on both accounts [iv] . Reprieved, Isaac was sentenced to trans­portation for life. He spent eight months on the hulk Retribution anchored at Woolwich in the Thames River prior to his transportation to Van Diemens Land and was incarcerated at York Gaol prior to this.

Isaac departed London for Hobart Town on 26 March 1829 aboard the convict ship Lady Harewood which was built at Thames, England in 1791. There were 208 convicts aboard with only one death during the 124 day journey which ended at Hobart Town on 28 July 1829, the very day Isaac's daughter Sarah Elizabeth turned one. At 40 years of age Isaac was 5 feet 4¼ inches [164 cm] tall, brown whiskers, an oval visage with a perpendicular fore­head, dark brown eye brows and dark hazel eyes. He had a long nose and medium to thick lips with a medium long chin. His trade was given as wool carder. [v]

Upon completion of the convict arrival process in Hobart Town, Isaac was sent to the Campbell Street penitentiary [vi] . From there he was sent to the Female House of Correction- the Female Factory, at the Cascades in South Hobart. There, he taught the convict women how to sort/comb/card and spin the wool. Wool prepared by the female prisoners at the Cascades Female Factory was sent to Maria Island to be woven into cloth. Having had experience as a wool carder/comber/sorter he was presumably regarded as an expert in this field. And Maria Island is where Isaac was soon sent. He arrived there in November 1829 (occupation given as weaver) where Commander Major Daunt Lord had a factory which produced 100 yards (91 metres) of cloth per week [vii] .

It is likely he was on the maiden voyage of the government cutter Charlotte which departed with prisoners and stores for Maria Island on 26 October 1829. On 7 March 1832 he was recommended for assignment but instead he was one of twenty four male convicts detained to assist in the closing down of the first Maria Island settlement. Isaac was still on Maria Island in April 1832 and may have left in September with the last of the convicts and Major Daunt Lord and his family.

Isaac was sent to Port Arthur [viii] in 1832 and in 1833 was on 'public works'-location not specified. No records have been discovered to explain why or in what capacity he was sent to Port Arthur and while there is nothing to suggest that it was as a punishment, his life took a decided turn for the worse after that. Until December 1836 there is not a single blemish on his conduct record. From 1840-1845 he was at Bridgewater-when not on the tread-wheel in Hobart or in the local lock-up. Isaac's records show he spent many days on the tread wheel in gaol-for 21 days from 13 August 1839 which was only nine days before his wife Alice and daughter Sarah Elizabeth were to have arrived in Hobart.

Eventually, in May 1840 the Lieuten­ant-Governor deprived him of his Ticket of Leave and ordered him to three months hard labour on the roads at Green Ponds and it was not until January 1842 that he was again granted a Ticket of Leave [ix] .

Meanwhile, in September 1838 Alice Briggs and her daughter, Sarah, had departed Liverpool, England for Sydney to join her husband Isaac in Van Diemens Land. They were accompanied by Isaac's brother Benjamin with his wife Lydey and their four children.

Their ship Dunlop, with Captain Bance in command of eighty-one emigrants from the UK headed for Hobart Town, ran ashore in fine weather at Cape Town, Cape of Good Hope, South Africa on 24 November 1838, going to pieces within hours. The Briggs families walked into Cape Town where for almost 6 weeks, they were at the mercy of local benevolent societies; a public subscription for donations having been established. On 1 January 1839 they departed Cape Town on the James Moran, arriving in Port Jackson, NSW on 11 February 1839.

Five months later, on 17 July 1839, Alice and Sarah Briggs left Sydney aboard the Medway at the expense of the Van Diemens Land government. The journey from Sydney to Hobart Town took an extraordinary five weeks. There were extremely bad storms and Master Borthwick Wight had to take measures to protect the passengers, one being Lady Jane Franklin, wife of Lieutenant-Governor John Franklin.

Eleven months after leaving Liverpool and within days of her destination, Alice died. She was buried at sea on 1 August 1839 off the Bay of Fires, north-east Van Diemens Land. This event and her interactions with Sarah Briggs are recorded in Lady Jane Franklin's journals [x] . On arrival In Hobart Town, Sarah was admitted to the Queens Orphan School at New Town. When she got to meet her father is not recorded but she was released from the Orphan school on 12 Nov 1841 to the care of her Uncle Benjamin and his wife.

Lydey died in childbirth shortly after and Sarah no doubt cared for the children. Sarah, aged 17, married convict John Cocker, aged 33, at Green Ponds on 22 August 1845. John had been sentenced to 21 years' transportation after conviction for his third attempt at desertion from the British Army; the last time in Montreal around the time of the Canadian Uprising. He received a conditional pardon in 1849 and he and Sarah went on to have eleven children.

After Isaac was granted a Ticket of Leave in 1842 for the second time he appears to have learnt his lesson because he only appeared before the Assistant Police Magistrate twice, in May and July 1843, for offences of drunkenness. Isaac worked with his brother Benjamin as a fellmonger, on the banks of the Jordan river. In Sep 1845 it was noted

and he was recommended for a conditional pardon which was finally granted on 4 May 1846, nearly 17 years after his arrival.

Within a year of Sarah marrying and just one month after Isaac's conditional pardon, Benjamin died and John and Sarah Cocker decided to leave the district and move North. They left behind Isaac who only ever met the first of his eleven grandchildren and eventually died in 1852. While his inquest [xii] found he died of natural causes, alcohol, malnutrition and loneliness all played a part. He is buried in an un-marked plot at St Marks Anglican Church, Pontville, where a plaque was erected to his memory by descendants in 2015. 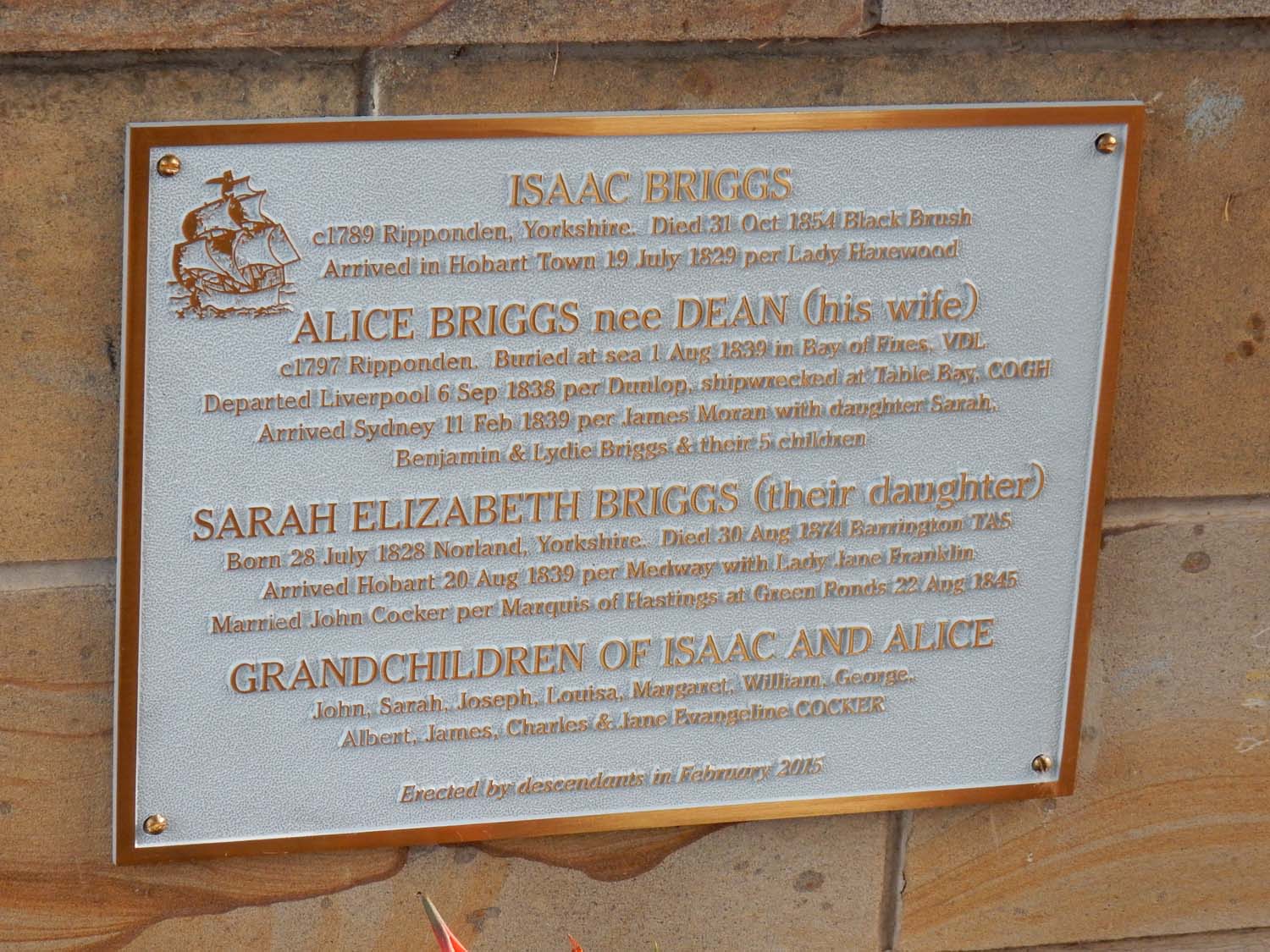