I think my great great grandmother deserves recognition for coming from Germany to a foreign land as a 19 year old and then giving birth to 6 children, while living in difficult conditions in the bush of North East Tasmania. Sadly she died at age 38 in the New Norfolk Hospital for the Insane and did not get a chance to raise her children to adulthood. I do not have a photograph of Louisa but her husband Robert is pictured on the far right hand side holding the muzzle loader.

We first knew of her in 1857 when at the age of 21 years she married ROBERT BLYTH at the Church of Scotland, Bothwell, Tasmania. Permission to marry had to be extracted from the Governor as Robert was still a Ticket of Leave man.

I have to wonder why Robert gave his age as 22, when he was in fact 39 years old! Details gained from later hospital admission forms show that Louisa arrived in the colony circa 1855, a free woman, aged 19 years. She was able to read and write and her occupation was that of a house maid. 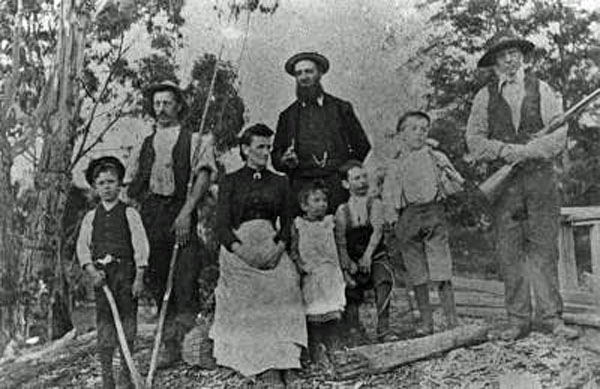 According to other documents found, her full name was Louisa Frederica Wilhamena KAUFMANN. The order of her given names varies with certificates but the names lead to the conclusion that Louisa was of German origins. The family story has it that she came from River Spree in Germany.

During the period that their residence was listed as Bothwell, Louisa gave birth to three children; Elizabeth (3 May 1858), Robert (27 Apr 1861) and Emily (15 May 1865). Robert was a shepherd during this time and probably spent little time at home. Next child born was my great grandfather Alfred (known as Little Grandad to his family)in 1868, followed by Matilda in 1870. By 23rd Oct 1872, when their last child, a son George Henry was born, Louisa and Robert were living at Prossers Forest. Just one month after George's birth, Louisa was admitted to the New Norfolk Hospital for the Insane.

I the undersigned, being a medical practitioner, hereby certify that I, on the 21st November 1872 personally examined Louisa Blyth of Prossers Forest, said Louisa Blyth is a lunatic and a proper person to be taken charge of and detained under care and treatment;
Dated this 21st November 1872
(Signed) William Mason of Launceston

The admission form went on to say that "Robert Blyth is a small farmer occupying fifty acres principally Bush land - he has a Cart and two horses constantly employed in conveying split timber into Launceston, we are of the opinion that he is able to pay one shilling per diem toward the maintenance of his Wife".

Louisa remained at the hospital, her condition deteriorating, untill her death on 29th October, 1874, aged 38.
She was buried in a paupers grave at New Norfolk. On a recent visit to the town we discovered in the Pioneer Park, a memorial wall dedicated to the inmates from the hospital. Louisa's name and date of death appears on the plaque.

You can use this contact form to send an email message to Kerrie Blyth
©TFHS Inc. All rights reserved
Site last updated December 2022