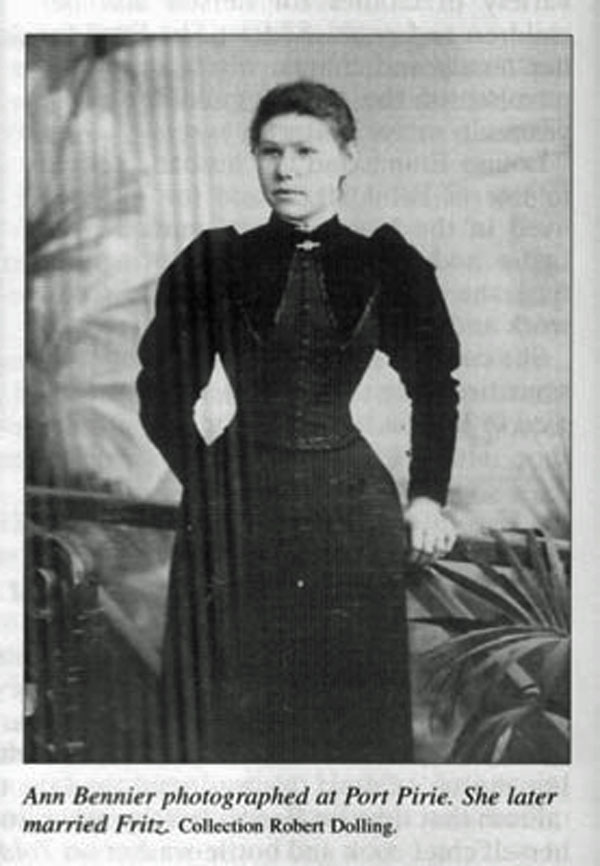 Ann with her husband Carl also known as Fritz moved to Glen Boree on the West Coast of South Australia.

Things were tough especially in times of drought as the farmers lost most of their stock and were forced to live on the bare necessities. Fritz would have to travel ten miles to get the water for the horses and remaining stock. Dust storms would last sometimes all day so the cleaning could take many hours. With seven boys and six girls there were plenty of hands to help with the chores. Somtimes as Ann done the household chores she was watched by the Aborigines leaning on a stick. They were on the look-out for some specials bacci, tea and sugar. Ann would ask them to do small jobs such as split the wood in return for "specials".

Ann did all her cooking outside as she had no kitchen. On one of her trips to Adelaide Fritz and the boys decided to build her a kitchen as a nice surprise but when she returned she was upset at what they had done. In time she got used to it.
Wheat bags, chaff bags as well as sugar bags were put to use around the house as peg bags aprons, mats and shading cloths tacked on to the verandah.

Although times tough there was always time for sport, tennis and cricket being the favourites. Ann also liked horse trots.

You can use this contact form to send an email message to Marilyn Oakley
©TFHS Inc. All rights reserved
Site last updated December 2022