This family history predominately relates to my grandparents Charles Edward Tomkinson and Ethel Clare Tomkinson (nee Jackson) with my research dating back to the early part of the nineteenth century. It begins with Thomas Tomkinson (1815 - 1885).

Thomas was born in 1815 in Macclesfield, a market town on the banks of the River Bollin in east Cheshire. The town is famous for its once thriving silk industry and boasts the only Silk Museum in the UK. It appears, however, that Thomas spent most of his 70 years living in Smallthorne which is an area of Stoke-on-Trent in North Staffordshire. He worked for most of his life as a Master Crate Maker, presumably for the Pottery Industry, but by the age of 55 he was an Auctioneer.

It was in Smallthorne where Thomas met and fell in love with Mary Tomkinson (family relationship unknown). She was born on 5th December 1813 and was a School Mistress. Thomas and Mary were married on 9th May 1837 at Wolstanton. They had four children, all boys, although one didn't survive to see his first birthday. Thomas died in 1885 and was buried on 5th April at St Saviour's Church, Smallthorne.

Further knowledge of Thomas' immediate family, Father, Mother and Siblings is lacking. However, following his death in 1885, a book of Thomas' poetry, simply titled "Poems", was published by F W Buck and Sons. Three of the poems do make references to family members and also provide an insight into the author as a talented poet, a religious and caring man who is well aware of his social responsibility and grateful for the social improvements taking place at the time.

One of the poems written in January 1874 is titled "An Epistle to my Brother in Australia":

Your welcome letter came with care,

And I have read it o'er and o'er

A brother's love could not do more.

They tell me that your lands are free,

And plenty dwells from shore to shore:

That all who strive may happy be,

What could a mortal wish for more?

They tell me that where'er you stray,

The scene is lovely to behold,

Your plains are fertile, and they say,

That all your mines are rich with gold.

But, brother, I am getting old,

With many ties to bind me here,

Which on the heart have taken hold

Too firmly, now, to break I fear.

'Tis now too late to cross the sea,

And in a foreign land to roam;

And then, I fear it could not be

So happy as my native home.

And what's another land to me,

With all its wealth and scenes so grand?

My heart can only happy be

Within my own dear native land.

Seas between us many a mile,

Now divide us from each other,

But there shall waft from this old isle

A blessing to my distant brother.

My family line continues with William Jones Tomkinson (1838 - 1915), the first-born son of Thomas and Mary. William married Martha Wildblood on 6th April 1859 and they had 12 children, including my grandfather, Charles Edward Tomkinson. Martha died on 11th September 1883 at Smallthorne due to childbirth complications.

Following Martha's death, William and six of the children, including Charles Edward, moved progressively to Tasmania. William remarried in July 1890 to Annie Harcourt Turner and they in turn had four children, all girls - Annie, Dorothy, Marjorie and Thelma. Sadly, Annie (the mother) died from drowning in June 1989, three months after the birth of Thelma.

And, so to Charles Edward Tomkinson (1876 - 1968). Charles and three other siblings boarded the Duke of Devonshire on 3rd September 1886 in London and arrived in Hobart on 29th October 1886. Father, William had previously arrived in Tasmania on the Clarence in 1885.

Charles joined Tasmania Police as a Constable in June 1902 at Hobart and two months later, in August 1902, was transferred to Linda Valley. It was at Linda Valley that Charles met Ethel Clare Jackson.

Ethel was the daughter of James Arthur Jackson and Edith Maud Jackson (nee Burgess). The Jackson research traces back to William Jackson (1788 - 1860). He was a convict, transported for a term of 14 years after being found in possession of three forged bank notes. He arrived in Sydney on 30th January 1816 aboard Ocean 1. Three of Jackson's sons, James, William and Henry, accompanied by a Martha Clark as free passengers, sailed from England on 3rd July 1817 aboard the convict transport Friendship and arrived in Sydney on 14th January 1818. The family line continues through James to his son, James Arthur Jackson, the father of Ethel Clare.

The Jackson name is synonymous with the town of Hamilton in Tasmania where Ethel was born in 1881. The family owned a number of properties in Hamilton, notably Glen Clyde House and Jackson's Emporium. St Peter's Church of England was the hub of community life in Hamilton. The Jackson families regularly attended church and for the sum of one pound a year they rented pews 11 and 12. A number of family members are buried in the church cemetery in an above ground vault.

With Hamilton in the doldrums economically, the Jackson Family joined the throngs of people moving to Tasmania's west coast at the turn of the 20th century to the developing mining tenements. The Jacksons were among the true pioneers of that time making the journey to the west coast by a combination of foot, pack animal and dray.

An outcome of that move resulted in the courtship of Charles Edward and Ethel Clare. They were married at St Martin's Church of England, Queenstown on 6th July 1904. Their first child, Thelma Maude was born at Linda prior to Charles' transfer to Zeehan in 1905. Charles was promoted to the rank of Sergeant at Zeehan. Following service on the North West Coast, progressively at Ulverstone, Railton and Deloraine from 1910 to 1914, Charles retuned to the West Coast to serve at Queenstown from 1914 to 1917. There were five more children to the marriage - Marjorie Isobel (1906); Charles Arthur (1908); Ronald William (1910); my mother Marie Ethel (1915) and Beryl Martha (1919).

Notable family experiences from the West Coast included residing in Zeehan when it was the third largest town in Tasmania after Hobart and Launceston with a population between 8,000 and 10,000 and no fewer than 17 hotels at one time. And, on 1st January 1917, Charles received a one-pound reward for stopping a runaway horse in Queenstown.

In 1917, Charles was again transferred to Ulverstone where he remained for the next 12 years, culminating in promotion to Inspector 3rd class. Further moves were to Oatlands (1929); New Norfolk (1930) with promotions to Inspector 2nd class and Inspector 1st class; Hobart (1935) and, finally, in 1939, promotion to Superintendent of the North West District and stationed at Burnie. Charles retired because of the age limit of 65 years on 12th December 1941. He was honoured with the presentation of an Imperial Service Medal by the Governor Sir Ernest Clark who commented on Charles' long career during which he received awards for extraordinary diligence on three occasions and was also commended for meritorious service on three occasions. 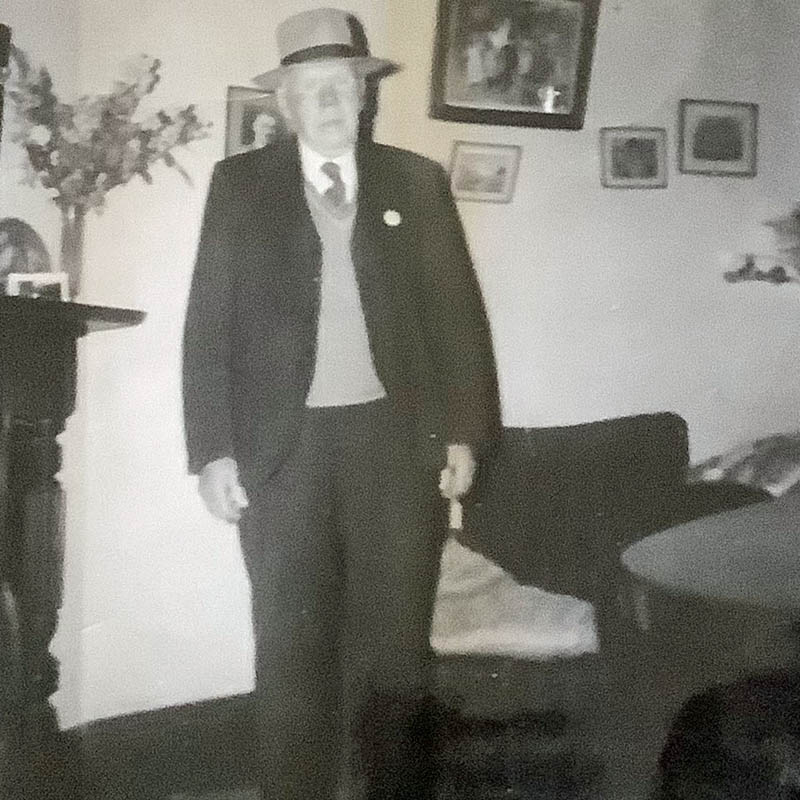 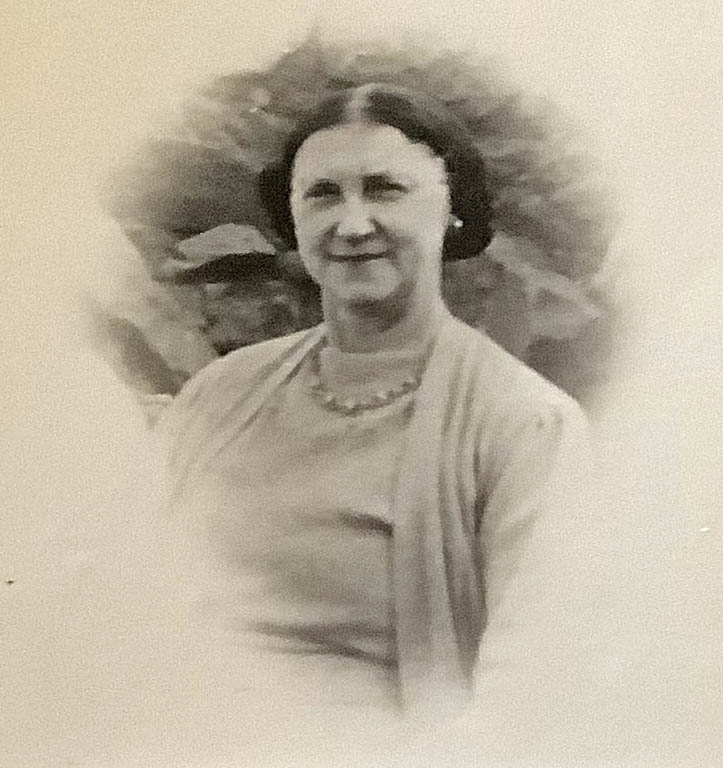 Charles and Ethel remained in Burnie in their retirement years living at 75 Wilmot Street, Burnie, which, along with a number of other nearby residential properties, was acquired for the building of the Burnie Civic Centre. One of their main retirement interests was their membership of the Burnie Bowls Club. Charles died at Burnie on 5th November 1968 and Ethel died at New Norfolk on 29th January 1969. They are both buried at the Wivenhoe General Cemetery, Burnie. 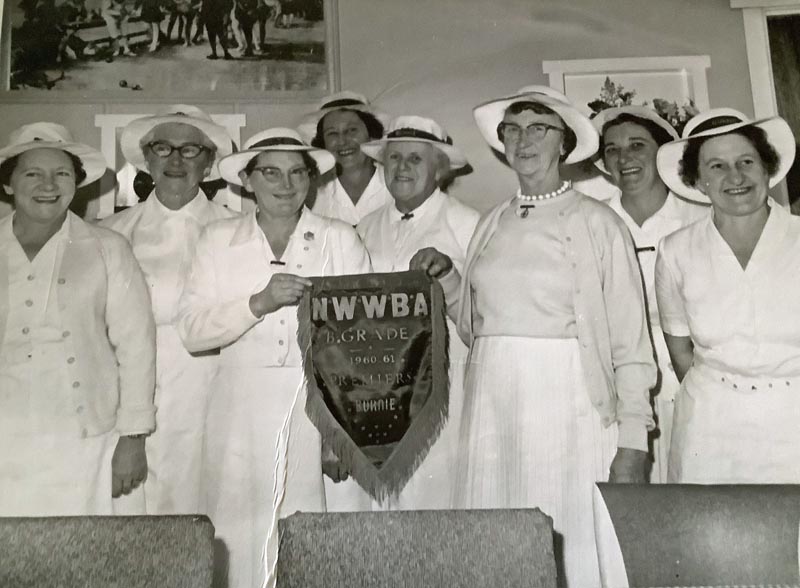 On a family holiday visit to Burnie in 1951, Charles handed me some typed words titled "A Splendid Code for Life" which reads:

"I shall pass through this world but once. Any good thing therefore that I can do or any kindness that I can show to any fellow creature let me do it now. Let me not defer or neglect it for I shall not pass this way again".

Charles' siblings established themselves in various parts of Tasmania, including the North-East, the Huon Valley and the Tasman Peninsula. In New Norfolk Football Club's first appearance in a Tasmanian Football League grand-final in 1959, the team included three cousins, namely Lyndon Clifford Harris, the son of Marjorie Isobel; myself, Kerry Donald Bowerman, the son of Marie Ethel and Kevin Richard Tomkinson, originally from North-East Tasmania and the grandson of Richard Tomkinson (born 1882) who was Charles Edward's brother.

The Tasmania Police vocation continued through Charles and Ethel's eldest son, Charles Arthur Tomkinson (1909 - 2001). He joined the Police Force as a Constable in 1930 and retired with the rank of Inspector in 1965. He was awarded the Police Long Service and Good Conduct Medal in April 1959.

The Tomkinson name for our particular family line ends with Peter Ronald Tomkinson, the son of Ronald William. Peter and Partner, June do not have children so it will rest with other descendants of William Jones Tomkinson to perpetuate the family name. 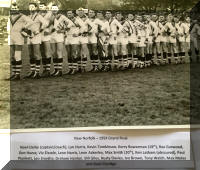 You can use this contact form to send an email message to Kerry Bowerman
©TFHS Inc. All rights reserved
Site last updated December 2022